On Feb. 5th at about noon local time ornaments started popping up on the the intel map. It MAY be the NIA is giving a peek at the portals that will have NIA deployed battle beacons on February 19 as part of the Kureze Effect event.  Agents scrambled to get info on all the locations before the ornaments disappeared.  Generally these ornaments showed up on portals that historically have had a lot of activity like battles to take control of the portal.  The ornament locations do NOT seem to be based on portal density or city size.  Most locations had clusters of portal ornaments that had 1 to 11 portals in close proximity to create a “play box”.  Some larger locations showed 2 or 3 “play boxes”.  Unofficially over 400 city locations of portal ornaments have been identified so far. This would be a GREAT opportunity  to get some or all the battle beacon ticks for your Kureze Effect medal!

More to come as we declassify information.  (We gotta retain something as part of Op Sec!) 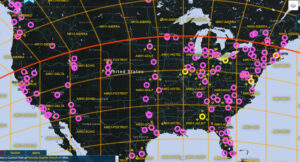